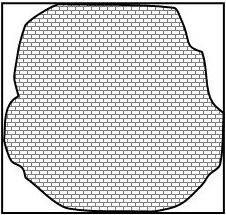 Then 2,000 amot are measured in each direction. Once again we draw a square or rectangle, which once again grants him additional space in the corners.[4]

This rule, that we square off the city, is derived from the Torah’s description of the area the Levites were given outside each of their cities:

The most straightforward explanation for why we square the teĥum is that it is extremely difficult to measure and mark off a circular boundary. One would need to measure 2,000 amot from almost each and every point of the city’s perimeter. In contrast, when marking off a square boundary, only four measurements need to be made – one in each of the four cardinal directions. After that, a straight line can be drawn in each direction, and the result is the teĥum.

Additionally, this method reflects a spiritual reality. A circle represents the infinite, which has no beginning and no end. A person’s life is circular and cyclical. His actions, wishes, and thoughts repeat themselves cyclically. Even his limbs are circular and cylindrical. This makes it difficult for a person to realize his aspirations. The way to solve the problem is to take one’s “circular” infinite ideas, and give them a “square” finite framework that will help him put them into practice. This is the meaning of teĥum Shabbat, which is meant to provide a framework for absorbing the holiness and blessing of Shabbat. This is why each city belonging to the Levites, who are charged with revealing faith in this world, is surrounded by a square boundary.

[4]. When measuring 2,000 amot from a city or town, according to Rambam and SA 398:5, we measure from the outermost homes or from the eruv (following the opinion of the Sages in Eruvin 57a). According to Rosh and Rema, one first adds the equivalent area of a karpif (an enclosed courtyard in front of the houses) to the city, which amounts to 70 2/3 amot (approximately 32 meters). This area is now considered part of the city. From there we measure 2,000 amot (following the opinion of R. Meir in the above gemara; see MB 398:21 and BHL s.v. “ve-khen”). As explained in section 8 below, when there are two settled areas adjacent to each other, SA agrees to the karpif rule.
Prev01. General Principles of Teĥum Shabbat
03. Teĥum Shabbat Is IndividualNext
Prev
Next
30 – Teĥum Shabbat